First off, why didn’t I get the memo that scrubs was moving to ABC? Seriously? I guess I should have been more loyal over the past couple of years. Yah, you guessed right, I am typing this while watching an episode of Scrubs with ABC.com’s built in web player.


The selection seems pretty resonable but like most websites. ABC.com is acting as a limited archive for their current shows. It is a mixed bag on what episodes are out there. As an example, LOST has the entire current season on it while Grey’s only has episodes 2,3 and 9 from this season.

Hit the read more button for the full rundown.

The shows are ad supported. Two ads per 30 minute and three ads per 60
minutes. Its not comskip SageTV setup, but for the price and
configuration I can’t complain to loudly.

I have a pretty speedy net connection and averaged 1631 kbps. It is
pretty watchable in my opinion. No blocking issues or lagging to speak
off. The streaming quality appears to dynamically adjust based on the
size of the video you choose. Full screen is streamed at 1631 while
windowed version is streamed at 1144 kbps. I didn’t detect any dynamic
changes based on bandwidth issues but that maybe due to my speedy net
connection.

The flash based player is actually pretty useful it allows you to skip
around in the show. Of course, you have to watch the ads if you skip to
far ahead. Again the price is right :). On the bright side I am going
to buy a Blackberry and a lot more mouthwash. The ads are 15 seconds
long and get repetitive after watching a few shows. I think they are
approaching Internet TV ads all wrong. You have a very interactive
medium and the best you can do is display a 15 second standard-TV style
ad? Try harder folks. 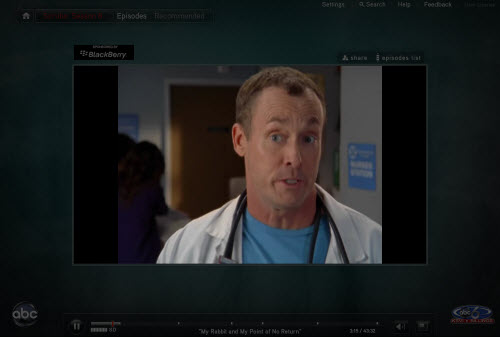 What can they do better?

They need to
rethink how they do their ads a bit more. I know it is early on in the
media streaming era but Internet advertising is not a new medium. Heck,
they didn’t even give me a website to click too.

They also need
to state what shows are in HD and what connection is required to get HD
streamed. All in all just provide more information about their
streaming site.

Last  but certainly not least, they need to
flesh out their library and be consistent with what episodes they
archive and when they plan on releasing new episodes. If they want me to become interested in their current shows, give me a way to watch the last season or the first season.

A Media Center plugin would be GREAT! Hint.

Ummm I think that is about it 🙂