Where have all the Online Spotlights gone? 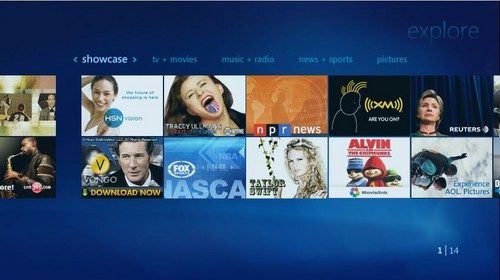 One of the oft-promoted, but rarely used portions of Vista’s Media Center is their Online Spotlight applications. If you have no idea what I’m talking about, it’s because it’s fairly well hidden. From the Media Center start menu, it’s under Online Media, and then Explore. Kinda jumps out at you, eh? But given the history of it, along with even current events, it’s understandable why Microsoft decided to somewhat hide it.

First, let’s talk about the good. Vongo & the Fox Sports Lounge are arguably two of the best online applications for any Media Center application or TiVo.Sure they haven’t changed at all since their launch, but not really necessary either. The Sports Lounge allows instant access to scores & events in your guide, and Vongo allows an unlimited supply of movies to your collection with their subscription. Most importantly, these are MCML apps that look & feel like Vista Media Center, and can be fully controlled with your remote.

Now…onto the bad. Recently, you may (or most actually have NOT noticed) that there are quite a few Online Spotlight applications missing. Most notably gone, are MTV Overdrive, TurboNick (Nickelodean) & Yahoo! Sports & Photos, just to name a few. These were some ratherly largely promoted plugins which were touted during Vista Media Center’s launch, and it’s with large disappointment that they can simply disappear without a replacement, or more importantly, an explanation. The saddest part of this, is that the majority of you reading this are probably learning that those online apps are gone for the first time now, because you, like many others, simply don’t use the Online Spotlight. 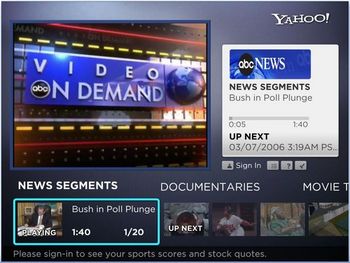 Is the reason you Media Center users don’t more often use these apps because you just don’t know they exist? Or because they simply don’t serve your needs? Or is it because half of them require some sort of fee or service contract? Either way, I think even Microsoft would agree that Online Spotlight has been fairly lackluster. It is clear however, that they’re not giving up on it, as they do continue to try new things. Just this week, I noticed some new icons on my start menu, for March Madness (kudos!), Super Bowl Ads (um…a bit late), and Learn How (How to videos for multiple MCE tasks).

So call me an optimist, but I honestly think the idea of Online Spotlight is FANTASTIC. Seriously, the ability to have on-demand content at your fingertips is great. Sure some of them charge, but I think most people would have no issue with that, if they truly understood what was there. My suggestion would be to have true integration with Media Center, I know some people at Microsoft have agreed this would be great too. Sure MCML has it going in the right direction (because wow, the old HTML apps were UGLY!), but they still get stuck in the cluster of "Online Spotlight," completely separate from the main features of Media Center, tucked away from 99% of the tasks people use Media Center for. 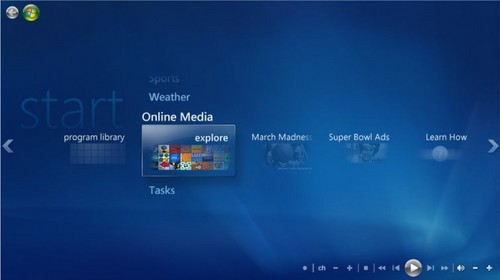 There’s a reason the Fox Sports Portal is the most popular — it A) Has it’s own row on the Start Menu, so it’s easy to find, and B) It’s friggin FANTASTIC to use. I can watch one basketball game with LiveTV, and then see the scores of all other games going on from the top, and instantly switch to those games. Now THAT’S true integration! Why not pass that same success over to other applications.

If you record or are watching the Discovery channel, BAM, popup appears asking you if you’d like to view more Discovery content via their portal. Watching HSN, then you get theirs. Here’s the money shot….going to the Movies Guide, BAM! you see the movies offered by Movielink or Vongo.
Think that might get more people to use the applications? I sure do, and hopefully in time we’ll see online content that well integrated so that the companies like Fox, Discovery, and others, will continue to develop (develop, not just make something, release it & be satisfied) quality applications for Media Center users. Then in turn, if more people use the online services, it will be less likely for them to disappear, especially since you just learned what they were 🙂