The Plex team has released a fairly major update to Plex for iOS, bringing the iOS version’s featureset up to par with the Android version. The two biggest features are the enhanced filtering that was first introduced with Plex/Web and the mobile media server. With the mobile media server, a device can be used as a Plex server for sharing […]

END_OF_DOCUMENT_TOKEN_TO_BE_REPLACED 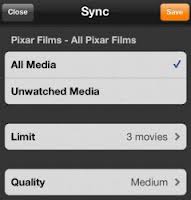 The release of Plex Media Server 0.9.6.8 also marked the release of Plex/Web, the first new feature for Plex developed under the PlexPass subscription program that the Plex team introduced earlier this year. PlexPass subscribers now have another early-release feature to play with: PlexSync. PlexSync will be a new feature for the Plex mobile clients that promises to greatly simplify […]

END_OF_DOCUMENT_TOKEN_TO_BE_REPLACED

Microsoft Smart Glass for XBox and …?

So the key question for us all is how will this work with Media Center?   Any chance this will allow WTV files (copy-freely of course) to be transfered to mobile devices?    While I’m sure some of you already use DVRMSToolbox or MCEBuddy or even Handbrake (which now reads WTV files BTW)  to do this, it would sure be nice to have a simple […]