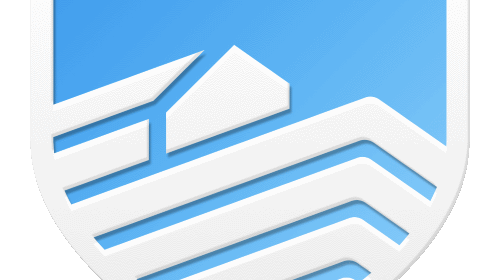 Between us, I have been procrastinating. Unwilling to take the final step towards a truly comprehensive data protection plan. The first two stages (multiple copies, multiple formats) have been in place for years. Leveraging RAID1 (redundancy), multiple hard disk drives (backup), and DVD archival (format shift) but taking my important data off premises has been a sticking point because of trust, and simplicity. Frankly, I just do not have enough faith in any cloud storage provider’s security. They are all big juicy targets and the risk of a breach just seems more likely (cough, iCloud) than the type of event that would wipe away all of my home storage. Fortunately though, I recently found a solution that I am comfortable with – something that protects the data itself, and significantly reduces the risk of data leakage if there is a breach. Thank you Arq. 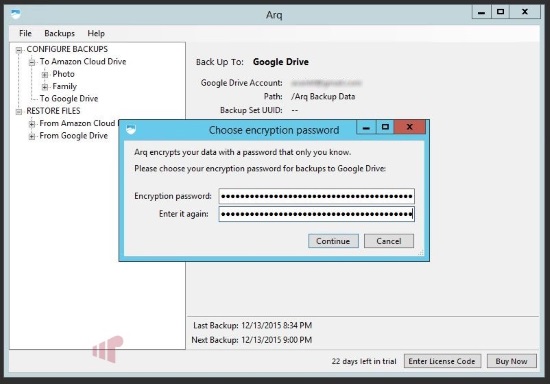 Arq is a simple application that supports all the major Cloud storage providers (Amazon AWS/Glacier/Cloud Drive, Microsoft OneDrive, Dropbox, and Google Drive/Cloud Storage), but the real trick to it is that it leverages client side encryption with a user provided key. Your key, that you create per provider, and only you have. So the data that ends up on the remote system is encrypted before it leaves your network and no one but the NSA, or a GPU farmer with too much time on their hands will be able to access it in transit or at rest on the Cloud provider’s disk.

There are some other great features that really make it stand out compared to applications that just copy data across the wire. Arq also offers data de-duplication (same data only uploads once) and time based file restore which completes the off premises backup story. As an added bonus the UI is simple, approachable, and straightforward enough that I never had to hit up the help files to get started. And while I am not sure that I would just hand it off to just any technophobe, with a little coaching it would be fine. 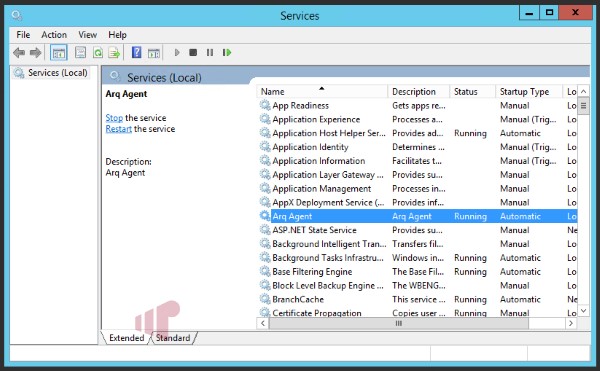 If, like me your data is stored on a headless server, it is critical that the solution works without requiring console access. So it was fantastic that Arq does all the heavy lifting from a Windows Service, so I do not need to log in and ensure that a UI application has started correctly.

If you are interested in a bit of control, there are several ways to specify how Arq works. Allowing email notifications, setting a storage budget per-provider, thinned backups, and some intelligence around bandwidth management. All said, configuring the software is as simple and well thought out as using it. It is not flashy, but gets the job done with minimal fuss.

Lastly this is what the folder looks like on the Cloud storage provider (Amazon Cloud Drive). Clearly not intended for human consumption, but as data is restored through the application itself that is OK.

If you page through all the image galleries, you will have noticed that it did not take long to move from trial to purchase. I was initially put off by the $40 price tag, but as I dug into it and became familiar with what Arq does, how it functions, and how well it works, it quickly became clear just how good a value it actually is. With complete client side encryption and time based, de-duplicated uploads, to all of the Cloud providers I use, Arq simply cannot be compared to simple file copy utilities. Now, I do have one niggle and it is that OneDrive is stupid slow. While that is not Arq’s fault, it is a concern given how long it takes to push data to it – although I was told that this will be alleviated somewhat in a future, more parallel, version of Arq. All told, if you were holding back from taking your data into The Cloud because of privacy and security concerns, I think the wait for a solution that just works is over. It is for me anyway – well done Arq.