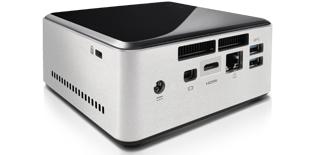 When Intel brought out their Haswell Next Unit of Computing (NUC), inclusion of features like SATA made it clear that they had bigger things in store for the little system. They were honest that some of this promise will require 3rd party case OEMs to fully realize, but Intel quickly announced that they would be creating their own chassis with 2.5” drive support a bit later. Providing this feature is interesting to two groups of users: those who have, or want to leverage a 2.5” SSD instead of mSATA or anyone who wants local, rotating, storage in the NUC. As it happens, now is the time, and when I sat down with Intel at CES to talk NUC they had one of the new 116.6mm x 112mm x 51.5mm enclosures for me to take back and run through the paces.

The larger D54250WYKH SKU includes the same Intel D54250WYB motherboard hosting an Intel Core i5-4250U as the smaller D54250WYK NUC previously reviewed (see the gallery for comparative photos), so all of the media/power/performance characteristics that were outlined previously will hold with this system and won’t be covered again. Instead the focus will only be on what is new and different. Obviously there is a size delta between the two chassis, and a metal mount sits inside to hold the 2.5” drive. To support the greater thermal requirements of a hard disc drive (HDD) there are additional cooling slots along the sides, the bottom panel is now only plastic and the thermal pad for the mSATA SSD will be moved to the 2.5” bracket (note that this sample does not have the pad, but it will be on production units).

The mount is limited to 9.5mm or smaller drives, so larger devices won’t fit without some unsightly modifications. The D54250WYKH was tested with a variety of different sized SSD and HDD including a one terabyte (TB) Western Digital Red and several SSDs without issue, but I don’t have anything thicker than 9.5mm on hand so it was not possible to gauge how much effort would be required to make it work. Being able to get a TB of local storage into the chassis should be good enough for most PVR scenarios. So personally, I find the limitation acceptable given the benefits of the form factor. 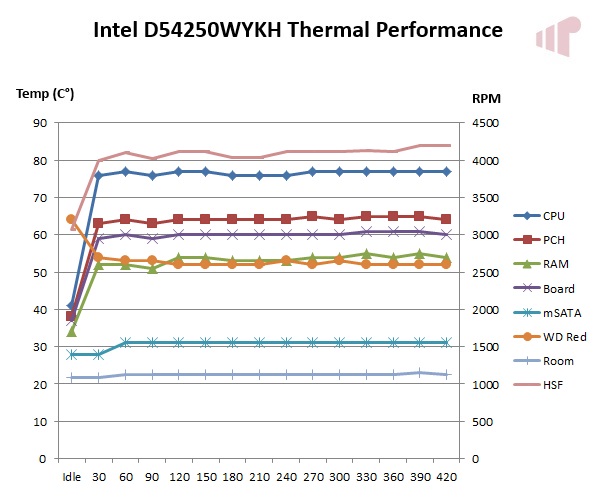 Given that the system itself was reviewed previously there were only a couple questions requiring analysis, one of which was thermal performance of the larger chassis under load. In the chart above temperature (left axis) was captured for the room and various components in the DH54250WYKH alongside heat sink and fan (HSF) speed (right axis) at thirty minute increments while running Prime95 after allowing the system thirty minutes of “idle” to create a baseline. As we can see the temperature is quite constant, and consistent with the changes in the surrounding conditions. Interestingly, we can clearly see the effect of increased airflow within the chassis as the HSF spun up from idle marked by a ten degree drop in temperature for the WD Red HDD as the enclosure was put under duress.

Aside from thermals, the only other thing I could think to test was whether the SATA connection would cause a decrease in performance. Happily no issues were noted either in use or during testing with SSD or HDD, as demonstrated by a simple file copy operation from the mSATA SSD to either device.

Whether you want to use the 2.5” drive support to enable extended local storage for content, bypass the smaller enclosure’s mSATA SSD requirement, or just for a bit of future-proofing the “H” models of Intel NUC add flexibility and deliver additional choice to the ecosystem with minimal compromise. The premium for this chassis is only incrementally higher than the original Intel Haswell NUC as well; MSRP for the SKUs are:  $373 for the Intel Core-i5 D54250WYKH, $295 for the Intel Core-i3 D34010WYKH, and $128 for the Baytrail based DN2820FYKH. All of which are shipping from Intel to distributers currently, so they should start to show up at retail outlets very soon, but don’t be surprised if there is a markup from MSRP initially just like when the D54250WYK first came out. I do hope to get a Baytrail review unit soon, because at that price it could be an outstanding value for client HTPC use if it can deliver similar playback characteristics as its Core siblings.

Thank you to Intel for providing the review sample.