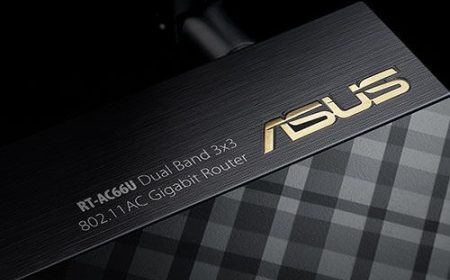 When you cannot install Ethernet throughout your house there are a few options available, but none tantalize the same way as 802.11AC’s promise of Gigabit-esque bandwidth with ease of wireless installation. Admittedly the recent trend in marketing routers by summing their potential speed is a bit confusing, but given the chance to redefine the home networking landscape we can forgive a lot. With a pair of ASUS’s RT-AC66U Dual-Band Wireless-AC1750 on hand we have the opportunity to explore this exciting new standard in depth. Can this $189 802.11AC multifunction home networking appliance deliver, or will it simply join the list of “not good enoughs” when it comes to meeting our most demanding media streaming needs.

The ASUS RT-AC66U doesn’t hold back when it comes to promising fast wireless performance. We’ll get to that later – first taking a quick look through the box at what comes with this 802.11AC router. Obviously we get ASUS’s all-black appliance, but there is also a flat Cat6 Ethernet cable, vertical stand, and flexible power supply unit with suitable plug adapters for the specific locale (this one included modules for the UK and Europe). With everything required to get started, there was nothing missing from the unboxing – and the power adapters length of 96” was greatly appreciated. When powered on, the indicator lights shine blue and as is normal for this type of device also blink. In most locations they will not be an issue, but if your install demands light control ASUS does not provide this feature out-of-the-box.

The ASUS RT-AC66U’s 1700 moniker is fabricated by adding its three stream 5GHz 802.11AC (1300Mbps) and 2.4GHz 802.11N (450Mbps) bands. Having two bands provides significant flexibility to segregate the network–offering an option that prioritizes range (2.4GHz) and one that prioritizes bandwidth (5GHz). Some may consider the detachable, external antennas unsightly but their presence is an essential aspect of the compromise required to maximize range and flexibility. Like most high-end routers the RT-AC66U includes four switched Gigabit Ethernet, one Gigabit WAN and two USB 2.0 ports. Traditionally adding USB was solely for function as a print server, but in this case it also provides significant end user flexibility to add storage (for NAS/media server tasks) or for USB wireless modems (dual WAN/WAN failover). The ASUS RT-AC66U also provides a great deal of flexibility in placement making it possible to wall mount in any orientation, sit flat, or stand via the included vertical brace.

Getting started with the ASUS RT-AC66U as a router is simple and straightforward. Plug it in, connect an Ethernet device to it, open the browser and the setup wizard will start walking through all of the steps required to connect the router to the WAN and configure your LAN. 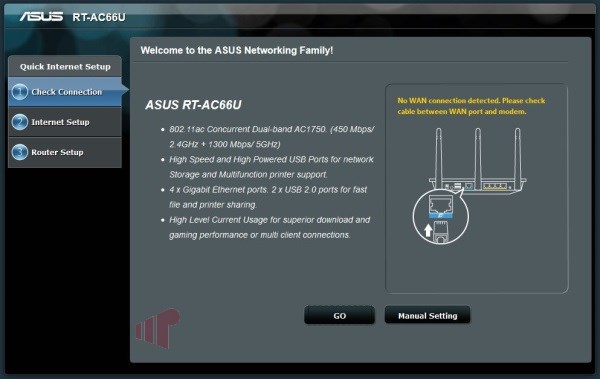 Complications arise if opting to use the ASUS RT-AC66U in one of the other operating modes and the WAN port is connected, because the device assumes it will be used as a router. So even if opting for a mode that allows for use of the WAN port, it should be unplugged if selecting one of the following modes:

The ASUS-WRT firmware provides a significant amount of functionality, moving the device quite clearly into “networking appliance” territory. This advancement is quite welcome; wrapping features like NAS, DLNA media server, FTP, VPN, WOL and a few others into an always-on box opens up many otherwise esoteric use cases to a wider audience. Don’t expect blazing performance from the NAS, it tops out at 14MB/s read and 10MB/s write, but it is perfect for simple streaming and many home user media tasks. 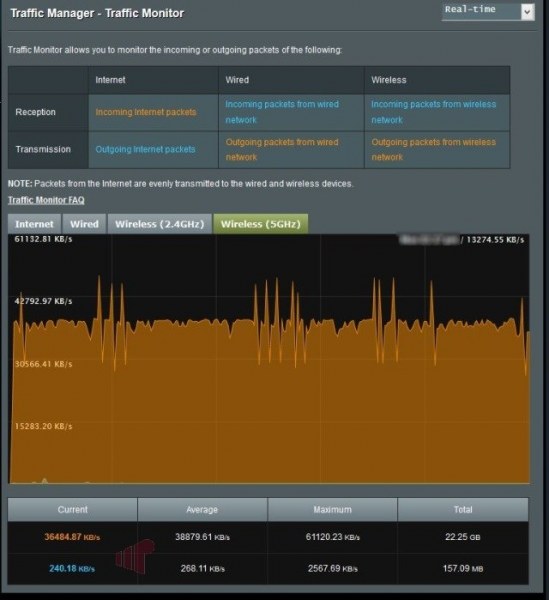 Of course these additional features are secondary to the main purpose of the ASUS RT-AC66U – delivering solid network performance. Happily bandwidth is not an issue with either wired (112-113MB/s) or most wireless scenarios (Media Bridge shown above) and power consumption is a livable 10.6W. Were it not for some issues that required weeks of troubleshooting to achieve stability and the complete uselessness of ASUS support, the RT-AC66U would be a much simpler sell.

When the ASUS RT-AC66U first arrived, the Media Bridge mode was completely unstable. The device running in Media Bridge mode would reboot at random intervals – never achieving uptime of more than seven hours. After attempting to engage ASUS support, and RMA’ing the device on their advice, I found that disabling the 2.4GHz radio solved this issue but uncovered another – the router would periodically start ignoring traffic from bridged MAC addresses. Besides the unnecessary exchange, and the constant regurgitation of FAQ links, nothing useful came from the interaction with support, and when I asked to escalate the ticket the CSR stopped responding. It was not until ASUS released the most recent firmware, which introduced Repeater mode, where an acceptable degree of stability was achievable with a repeated (i.e. use with any Media Bridge is still not 100% stable) network, and here only when running the router in the default (192.168.1.1) subnet.

To be clear, it is not uncommon to uncover issues during testing – in fact it is unusual not to. Nothing is perfect, and we try to spend enough time with a product to really get to know the ins and outs in order to deliver the most complete review possible. What is different this time–compared to other vendors–is ASUS’s complete disregard for the issues experienced, both through normal support channels as well as after engaging their public relations team (Editor’s Note: We try to avoid this route, as historically the PR team gets premium support which could cause an unrealistic experience. Clearly that wasn’t the case for Andrew). Frankly, the degree of callous indifference displayed in this case is appalling. That is not to say the hardware is not capable, it clearly is, just be aware that should any issues be encountered you are on you own.

That said, there is a vibrant user community built up around ASUS’s wireless network products at SmallNetBuilder, and since ASUS provides the source code to the devices it is possible for 3rd parties to customize and fix issues with the RT-AC66U. For example, I have been running Asuswrt-Merlin because–along with some other nice features and fixes–it makes it possible to disable the LED lights on the front. 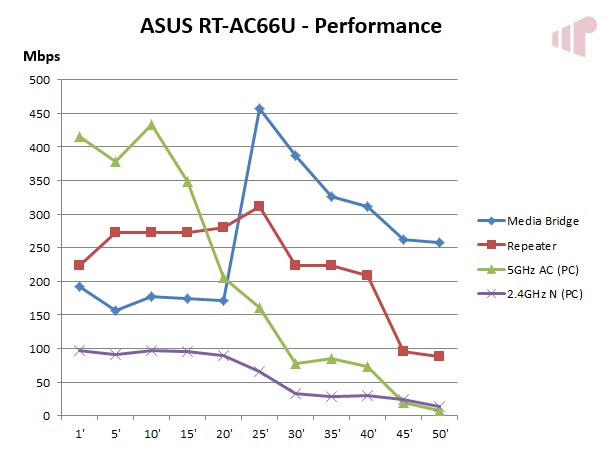 Taking a more detailed look at Wi-Fi performance, we can see that while the ASUS RT-AC66U does not deliver the Gigabit-replacement bandwidth levels noted on the box it does provide an excellent option for providing serious streaming capability well above the magic 100Mbps mark required for streaming 3D and high bit-rate Blu-ray ISO, even in Repeater Mode. Digging into the chart above, it is important to understand how the numbers were gathered – and the environment in which they were collected.

All of the testing was conducted in a three-story brick house, with positions 1-20’ measured on the first floor, 25-35’ on the second, and 40-50’ on the third. In all tests a large file was copied between two SSD equipped PC’s on either side of the wireless network after setting a Gigabit Ethernet baseline (the 112-113MB/s noted earlier) to control for other potential bottlenecks. Media Bridge and Repeater modes were tested using two ASUS RT-AC66U connected to the respective PCs via Cat6, then the 2nd RT-AC66U was disabled and one of the SSD equipped PCs was bound directly to the RT-AC66U router with an Intel Dual Band Wireless-AC 7260 adapter. Wireless performance was measured in Windows 7 and Windows 8 per band to control for driver differences and then averaged (they weren’t that different) to present a single PC/band metric. With that out of the way, it should be clear that in many scenarios 802.11AC provides a non-hardwired home networking solution capable of delivering enough bandwidth for even the most demanding media streaming, and does it with the inherent flexibility of a wireless networking solution.

When it comes to speed and range the ASUS AC-RT66U shines, but unfortunately the same cannot be said when it comes to stability in operation — especially in Media Bridge mode. Some of this can be overcome by running the 802.11AC router in its default subnet (192.168.1.1), although it is concerning that deviation from this causes issue on both end of the bridge. Otherwise the flexibility to operate as a Repeater, which is stable (in 192.168.1.1), though bandwidth suffers in this configuration but still manages to consistently deliver more than 100Mbps inside of 45’. Unfortunately there is no fix for the abysmal support ASUS provides, which makes it difficult to recommend the $189 RT-AC66U to anyone not comfortable handling any issues via DIY.