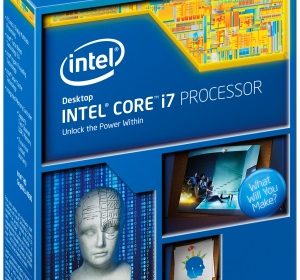 For home theater PC (HTPC) enthusiasts, the 4th generation Intel Core “Haswell” family of processors has been greatly anticipated. Expectations have been set both for its GPU performance, and that the long-standing issue with refresh rate accuracy will finally be put to rest. Unfortunately time with the new integrated processor graphics (IPG) was limited to just a few hours, but a significant amount of information was gleaned in the available window, with the high-end Intel Core i7-4770K and two Intel motherboards, the DZ87KLT-75K and DH87RL, provided for testing. Of course, because this is a desktop IPG “high-end” speaks only to the CPU half of the chip. Unlike previous generations, Intel’s GPU breakdown is much more complex this time around with the high-end “Iris” graphics not available on the i7-4770K; it provides only Intel HD 4600 graphics. This will limit our ability to truly examine how far 4th generation graphics have come, hopefully something that can be addressed at a later point as the lineup widens. Now let’s get into our first look.

The Intel Core i7-4770K tops the 4th generation desktop IGP lineup. The unlocked four core, eight thread CPU runs at 3.5-3.9GHz and retails for $339. While its HD 4600 integrated graphics unit boasts a higher dynamic frequency of any other LGA-1150 Haswell i7, strangely it and several other IPG, do not offer one of the arguably more interesting features introduced with the family – Intel® Transactional Synchronization Extensions (TSX). With more applications taking advantage of an increasingly multi-core world, it seems somewhat bizarre to withhold a feature intended to reduce bottlenecks in multi-threaded workloads from any model in the lineup. Withholding it from the most expensive, highest performance, SKU – even more so.

The Full-ATX DZ87KLT-75K is a beast of a board. Mostly boasting features intended for overclockers and gamers, its eight 6Gbps SATA ports, eight USB 3.0 ports, six PCIe, one PCI, five free PWM fan headers, and dual Intel (i217-V and I210) network interface controllers (NIC) also make it well suited for duty as a high-end file server or full-size HTPC. Like most Intel boards, it also offers consumer IR (CIR) and the ability to control power LED behavior in standby (S3). Both of these features will be sorely missed when Intel exits the retail motherboard market after this generation. With as much as this board offers, I have to question the absence of DisplayPort. While HDMI is much more useful to the HTPC crowd, if there can be only one; DisplayPort’s support for higher resolutions seems like the obvious choice in a broader context. In the rush I completely forgot that Thunderbolt is also a video connector, so it should be possible to use a mini-DisplayPort adapter with it. Have one on order, so it will definitely be covered in the full review.

While external light control is celebrated, the internals also sport several well-lit areas, which depending on use may need some curtailment as well. There is a promising looking option for this in the BIOS, but it has not yet been tested.

The Intel DZ87KLT-75K includes an updated version of Visual BIOS. Besides some polish, it adds the ability to take screenshots, but unfortunately I was not able to get that feature to work. Otherwise, the implementation is quite similar to last year’s high-end Intel motherboards. There was a change to the performance section which caused a few minutes of confusion when initially configuring the system. The Kingston KHX16LC9K2/16X RAM used to test the boards supports XMP-1600 @ 1.35V, and selecting this feature was initially elusive until discovering that “Memory >” must be clicked to expose this setting. Given the diverse set of options there is much for the adventurous to explore, just leave the “Native ACPI OS PCIe SUpport” setting alone for now though – since checking it made both this board and the DH87RL lockup when changing the resolution using the built-in Windows mechanism.

Those looking for something a bit less full-featured, and full-sized, the micro-ATX Intel DH87RL Media Series board offers a suitable alternative. Like the DZ87KLT-75K it also offers CIR and control over the power LED, but limit you to just one (i217-V) NIC and six 6Gbps SATA (five SATA, one mSATA) ports. LGA-1150 is compatible with LGA-1155/1156 heat sink and fan (HSF), the Intel retail model used in the builds fit without any issues. Capacitor placement next to the CPU socket was a source of initial concern, but ultimately proved unfounded with larger 3rd party models – at least when it came to the Swiftech MCX-VCore. It might still be a problem for shorter-wider HSF though.

The DH87RL’s Intel Visual BIOS is similar enough in function, and identical in challenge, to the DZ87KLT-75K that it does not warrant specific discussion.

The Intel Core-i7 4770K was installed in both boards, with the OS and drivers sliding on without complaint. The Windows Experience Index is a rough measure of performance, incapable of discerning between the builds.

Like the other Intel Core IPG, the 4th generation Haswell supports HD audio code bit streaming and HDCP over HDMI.

Time was too short for a detailed look at QuickSync, but when a few test clips surfaced from Intel it was impossible pass by the challenge untested. In this case a version of QSTranscode, modified to ignore audio streams, was used to take a few passes at a 100Mbps 4K video, and two 25Mbps 1080p files. The gap between Ivy Bridge and Haswell for 4K was surprising (CPU utilization hints that the Ivy Bridge system may need a driver update), but the results from the short 1080p files was not with the Core i7-4770K slightly edging the previous generation Core i7-3770K on aggregate. Intel is claiming significant visual quality gains for 4th generation Core IPGs, with this test was just about speed, that will be examined later.

And no issues were observed with PAL content in Windows Media Center.

Levels were exactly as we expect from Intel GPU. Blacker-than-black (BTB) and whiter-than-white (WTW) were correctly displayed using RGB-limited output over HDMI. The driver configuration tool does offer an updated user interface and a promising “Limited/RGB” toggle, but just like before that setting does not produce RGB-full output when HDMI is used. This is definitely more niggle than issue, with the default behavior “correct” for most users. More flexibility for those who like to tinker, would be preferred however.

One of Haswell’s promises was more GPU, a lot more GPU, for integrated users. While that still may be true for the higher-end “Iris” GPUs, the HD4600 in the Intel Core i7-4770K still does not provide enough processing power to opt for Jinc from madVR’s available algorithms, with 720p60 a clearly failing to render smoothly. 480p and 1080i were both acceptable, as was opting for Lanczos (3 taps with anti-ringing) for all non-4K resolutions. That said madVR also exposes Intel’s DXVA scaling, which is good enough that mostly just flexibility is missing, and as an added bonus it can process 4K.

Intel has historically struggled to deliver competitive refresh rate accuracy with its GPUs and chipsets. This is no longer the case with 4th generation Intel Core HD graphics, with refresh rate precision for 24p, 29.97 & 59.94 content that is consistent with, or better than, what other vendors provide out of the box. Also worth noting, is that unlike previous generation Core HD graphics where there was occasional drift in the refresh rate, Haswell GPUs exhibiting much less variation once playback begins.

Finally, a quick look at the HD 4600’s HQV-HD score. While it is not the best score given (that honor is currently held by the Onkyo TX-NR818, which contains HQV video processing hardware), it is competitive and slightly better than what the HD 4000 achieved. Before moving on, it should be noted that while the HD 4600, and every other processor noted above, correctly detected each of the cadence clips (marked in green) moiré was still visible in each clip so a score of “0” was awarded. Many reviewers allocate points based on detection instead of the presence of moiré, so while it is not recommended that scores from different sources are compared, it may be necessary to adjust accordingly (+40) when ignoring that guidance.

With only a few hours spent with the Intel Core i7-4770K, DZ87KLT-75K, and DH87RL focus was primarily given to the larger pending questions around the performance of Intel HD 4600 Graphics in a HTPC context. Happily we can finally put concerns around refresh rate accuracy to rest, with the Intel Core i7-4770K exhibiting improvements significant enough to nullify any advantages enjoyed by competing graphics solutions. Raw GPU performance, specifically as it relates to madVR, was not as generous however. While performance gains were observed, they were not sufficient to consider this topic closed – with the most demanding, Jinc, algorithm still off-limits to Intel’s desktop IPG products. There is still significant ground to cover in the full review, especially in the areas of compatibility, platform stability, and performance – focusing specifically on both QuickSync and CPU improvements. Make sure to check back for our detailed analysis of Intel’s newest platform shortly.

Thanks to Intel for providing the review samples.