When I first saw the Phantom Lapboard, created by Phantom Entertainment Inc., I was surprised to see it was advertised for Home Theater PC (HTPC) usage.  The design, while aesthetically pleasing, is anything but your typical HTPC keyboard design.  Needless to say, I was skeptical.  I have had several weeks to evaluate the Lapboard and I believe the designers were influenced by American architect Louis Sullivan.  Sullivan coined the phrase “form ever follows function,” or simply put form follows function.  Read on to see why the Phantom Lapboard pays homage to Sullivan’s principle.

Initially designed for a gaming console, the Lapboard is geared towards any 10-foot experience; whether it is a Media Center-type application, PC sofa-gaming via your HTPC or even console gaming on the PS3.  As shown below, the kit includes the keyboard, laser mouse, USB dongle receiver and four AA batteries, basically everything you would expect from a keyboard\mouse combination.  I would highly recommend not using the included batteries; their quality is questionable and may lead to a less than stellar first impression. 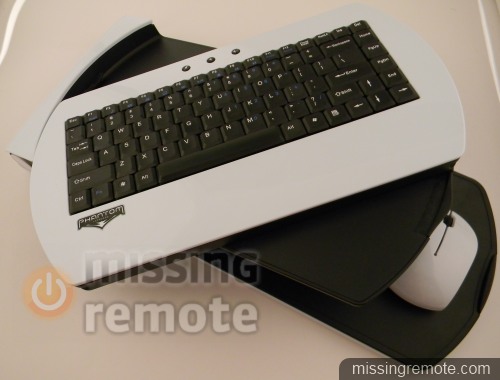 So what is a Lapboard and what makes it unique?  The Phantom Lapboard is a combination 2.4 GHz radio frequency (RF) wireless keyboard and separate wireless laser mouse.  What makes it truly special is an integrated mousing surface beneath the keyboard keys allowing you to use both keyboard and mouse from your lap, hence the aptly named Lapboard.

To start let’s go over the product features and specifications: 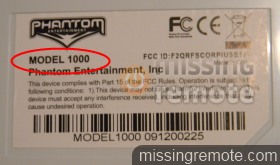 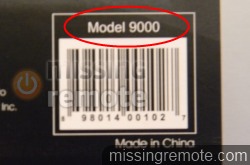 Setting up the Phantom Laptop for the first time was a breeze. I had no issues on Windows 7 (64-bit), Mac OS X (both Leopard and Snow Leopard) or with the Sony PS3. As with most combination kits, both keyboard and mouse were synchronized to the USB receiver out of box. If you do need to reconnect them, there is a connect button on each piece of hardware. The connect, or ID Setting, process involves first pressing the connect button on the dongle receiver followed by pressing the connect button on the mouse or keyboard. You must complete the process within 8 seconds of pressing the dongle connect button. If successful the LED on the dongle will rapidly blink for a few seconds. You will need to perform the reconnect process individually on each hardware, the mouse and keyboard. The product manual also describes the reconnect process in detail.

When choosing a location for the USB receiver please note that RF wireless technology is prone to interference and other environmental influences. I typically dislike seeing any dongles on my HTPC; I initially tried using a rear USB port while in the media console, however would not recommend following suite. The reliable wireless range dropped to under 5 feet, much less than the advertised 33 feet. I reluctantly moved the USB receiver to a front USB port with a clear line of sight. This yielded a result more consistent with the advertised range. Similarly, attaching the USB receive to a short USB extension on a rear USB port proved enough to reliably use the mouse and keyboard from ~20 feet away.

As previously mentioned, do not use the included AA batteries, or do so with the expectation that it will not perform well. I tested both the keyboard and mouse using a mixture of alkaline, lithium and rechargeable NiMH batteries. While all batteries performed well, the alkaline batteries performed the best at 24-28 foot range. This is expected and common among wireless devices and most likely will only be noticeable with fresh batteries. The slight difference can be attributed to the fact that NiMH batteries operate at 1.2V while alkaline batteries are rated at 1.5V. Due to their high resistance, alkaline batteries will in turn drop to 1.2 and lower when depleting. 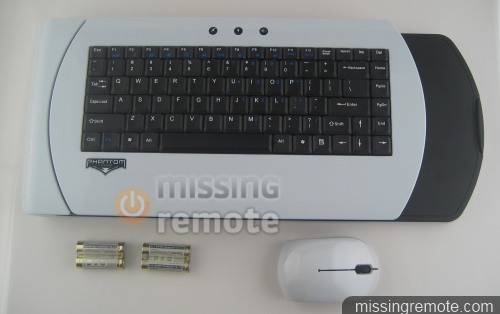 The Lapboard is designed to be used from your lap with the keyboard tilted at an angle while one hand rests on the mouse underneath and the other on the keyboard. The ergonomics may seem strange at first but for one-handed usage the keyboard feels extremely natural even after prolonged usage. For extended typing, such as while writing this review, I recommend lowering the keyboard to a horizontal position for a more natural two-handed typing. 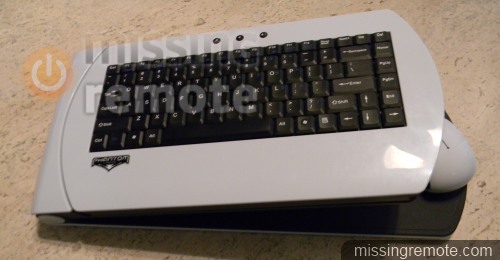 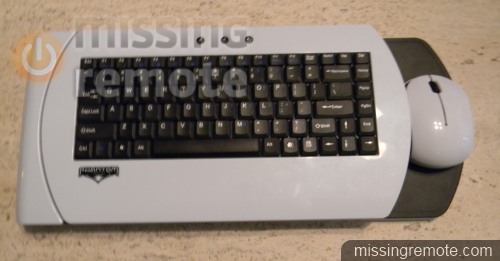 Note: The product documentation does not include instructions on how to lower the keyboard once raised. There is a latch on the end of the keyboard that needs to be pushed in to unlock the keyboard. It was not clear to me and I could have easily broken the latch attempting to force it down. 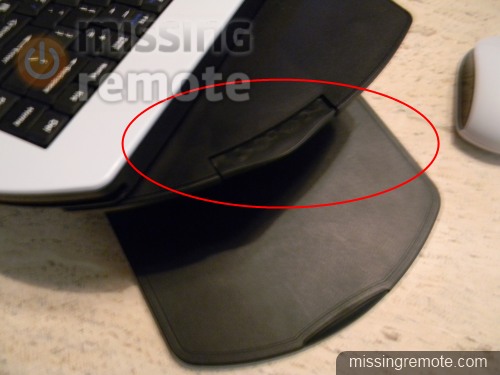 Before giving my final opinion on the Phantom Lapboard, let me introduce you to whose opinion really matters in the household—Gatinha (aka Mrs. Mikinho). The Spousal Acceptance Factor (SAF) is something most of us who live with others must comply to, and as such have sought the feedback from mine for the purposes of this review:

The relatively high price tag will undoubtedly scare some consumers away but after using the Phantom Lapboard for several weeks I’m happy to say I am in agreement with my wife—it is a keeper. While the Phantom Lapboard is not enough to make me want to install PC games on my HTPC, it has earned a place on the coffee table, or at least on a side table, by making Netflix, Boxee and Hulu Desktop a much easier experience.

I can positively say that in the case of the Phantom Lapboard, form follows function. They sought to create a keyboard and mouse that could be used for gaming or multimedia usage from the couch and came up with an unique designed that allowed you do to just that.

Special thanks to Phantom Entertainment Inc. for providing the review sample. The Phantom Lapboard is available for purchase directly via their website at http://www.phantom.net/. You can also follow them on Twitter. As always, please let me know if you have any questions or comments.