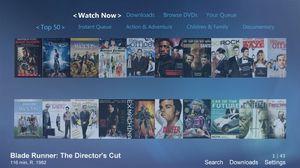 Netflix & Media Center users must be excited these days. With Netflix allowing for streaming of movies to your computer, it was inevitable for some fantastic developer to create an MCE plugin which would bring that to your home theater PC with the convenience of your remote control & from your sofa.

Nobody could have predicted however, that there would not be one, or two…but THREE different Netflix plugins for MCE. So, since we’re here to help, we’ve decided to do a special 10th edition of our Life With a Plugin series, matching up the 3 Netflix Plugins to see which is worth your time–MyNetflix, vmcNetFlix & NetflixMC.

Due to the nature of this review, I’ll be doing things a bit different, but hopefully keep things short & clear who the winner(s) are.  Click the title for the full article.

Each of these is basically completely different, so let’s see what the system requirements are for each one respectively.

So as you can see, quite a difference in requirements. XP users should be pleased to see that NetflixMC will still support them, and if you hate .NET framework, you can go the vmcNetFlix route. They all require something, but still pretty manageable.

As you can imagine, the main feature of playing movies is supported 🙂 So what other goodies are thrown in with these?

Feature wise again, they all seem to have the major ones you’d be expecting. Managing your queue is a big shortcoming of NetflixMC, but the developer says it’s almost ready, so we won’t knock it too much. Besides, you know everyone reading this is interested in Streaming…so let’s just move on.

vmcNetFlix: Quite simple & effective. Everything worked smoothly & quickly…and did i mention it works on Extenders?!? The interface is very clean, easy to browse through, and then just as quick to start streaming as using Netflix’ website itself. An on-screen keyboard helps login & find just what you need. Viewing the various categories is simple & fast, and the artwork loads quite quickly. Viewing the individual movie details you can see all the power of the app, with the ability to stream, download, add to queue…basically anything you could want to do.

MyNetflix: This one is a bit different, in that it actually does use the Netflix Movie Player within the Media Center interface. If vmcNetFlix does the same, it does so in a much more transparant way than MyNetflix. Within MyNetflix, you can actually see the player load just as if you were using it from your browser. It all ends up playing ok, but it’s a little clunky to see the Netflix webpage prior to you movie playing. And of course, this is a major limitation as to why this will NOT work on Extenders. The interface is gorgeous however, and very responsive. The ability to manage your queue is simple & effective.

NetflixMC: The only of the the 3 plugins which does not require the Netflix WatchNow player to be installed, this is also the least refined of the apps. It shares the 2′ Configuration tool like MyNetflix, which allows you to login, set your speed, and even adjust the menus you see. A nice feature, but one that is overshadowed by the sluggish WPF interface. As you can see by the screenshot, it has Beta written as part of the background, so I’m sure there’s more to come, but I found the "beta" tag to be a bit unnecessary.

In the short span of using all 3 of the Netflix applications, it became clear that vmcNetflix stood above & beyond the competitors. It’s quick, simple & easily the most powerful. Being the only player that reliably will stream to Extenders is a BIG win for them as well. The interface is gorgeous, and I found it to be very fast & simple to use, for novice & advanced Netflix users.

First runner up is MyNetflix, which does an admirable job as well, but suffers from its reliance on the Netflix WatchNow player. While this may make maintenance easier in case Netflix starts blocking apps, it did make the playback a bit cluttered having to see the webpage prior to playback. But the interface IS beautiful, and the app was still easy to use.

Last on my list is NetflixMC…unless you have WindowsXP…in which case it’s first simply because it’s the only XP-supported app. The developer’s insistance on using WPF (Windows Presentation Foundation) instead of Vista MCE’s native MCML (Media Center Markup Layer) is wonderful for the dual-platform support, but hinders the performance of the application significantly. It’s specifically in fancy, graphic intensive applications like Netflix where MCML stands out being much faster. I found myself impatient waiting for the thumbnails to load, and the overall sluggishness of the interface in general.

So, there you have it, my winner for these very initial releases of Netflix offerings is….vmcNetflix. By no means are the other two bad, just vmcNetflix does everything so well, and the addition of Extender support allows it to stand alone. All three are 100% free though, so if you have some time, feel free to give them all a test run today!