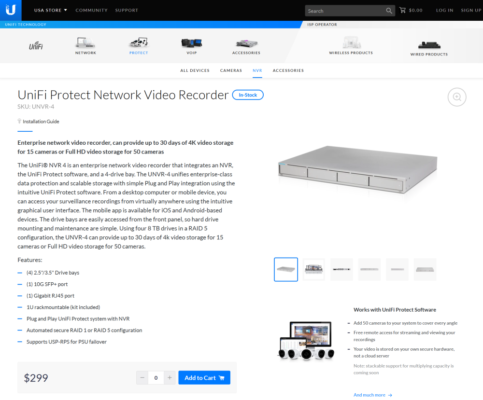 It’s been known for a while that Ubiquiti (UI) was coming out with a new Protect network video recorder (NVR) that sorts many of the issues with the current generation of their devices. Most notably the lack of disc redundancy. With support for four drives, that can be run in either RAID 1 or RAID 5 (not sure how the RAID 1 thing would work with four drives…), it finally ticks that box. Now if only they could support actually backing up the videos…

If you have $299 burning a hole in your pocket, the UNVR-4 is available at the UI store.

The UniFi® NVR 4 is an enterprise network video recorder that integrates an NVR, the UniFi Protect software, and a 4-drive bay. The UNVR-4 unifies enterprise-class data protection and scalable storage with simple Plug and Play integration using the intuitive UniFi Protect software. From a desktop computer or mobile device, you can access your surveillance recordings from virtually anywhere using the intuitive graphical user interface. The mobile app is available for iOS and Android-based devices. The drive bays are easily accessed from the front panel, so hard drive mounting and maintenance are simple. Using four 8 TB drives in a RAID 5 configuration, the UNVR-4 can provide up to 30 days of 4k video storage for 15 cameras or Full HD video storage for 50 cameras.