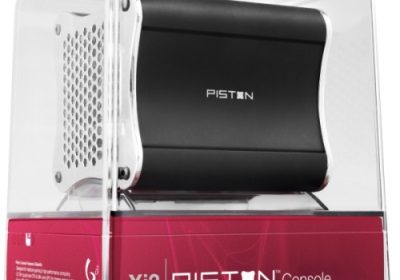 We saw Xi3’s unique brand of SFF at CES last year, and they created some buzz later by hinting that they were the Steam Box, but we didn’t have a date for when we could actually buy this miniscule PC aimed at gaming and media consumption. It looks like Xi3 has answered the date question with the quad-core PISTON available for purchase on November 29th – just in time for Black Friday. To help with the other open questions, including the Steam Box one, they’ve published a FAQ (spoiler: no, but yes :)) and included the usual PR available after the click. Overall it looks pretty slick until you get to the part about price – $999. Ouch!

“The PISTON Console is just Xi3’s first step in what we believe will be a transformative technology revolution for the Living Room,” said Jason A. Sullivan, Xi3’s founder, president and CEO. “Unfortunately, I can’t tell you what I know is coming because it’s not time to tell you. But I will say this: the bar has been raised. PISTON is smaller, lighter, and will last longer, provide more gaming options and be more powerful than any other gaming console on the planet. The reason I feel confident in saying this is because we started with a clean slate, unlike competing manufacturers. And that Tabula Rasa approach is what sets PISTON apart from other gaming systems today and what will set us apart tomorrow.

“That’s why I’ve decided we’ll provide the first public preview of production PISTON Consoles at the Interop New York trade show this week at the Jacob Javits Convention Center. Journalists and Interop attendees are invited to come by booth #401 on either Wednesday or Thursday (Oct. 2—3) to try out PISTON for themselves.”

Previously, Xi3 announced that PISTON utilizes internal solid-state SSD storage and that PISTON Consoles will ship standard with 128GB of SSD storage. Xi3 further revealed today that it has been able to double the potential SSD storage capacity of the PISTON Console by adding a second SSD connector within its PISTON design, as well as a separate, internal microSD slot. This second SSD connector gives PISTONs the capability of more than 1TB of super-fast (6Gbps) solid-state storage.

Xi3 also revealed today that it has designed the PISTON’s Ethernet controller to recognize and prioritize computer gaming data to the top of PISTON’s network queue. Such data traffic prioritization will further speed-up response times for PISTON gameplay. Additional details about optimized gameplay data traffic will be revealed at a future date.

“With the latest and greatest games—whether played solo, against your buddy, or in online MMO titles—those extra milliseconds provided by PISTON’s optimized gaming traffic can mean the difference between victory or death,” Sullivan explained. “PISTON’s solid-state drives also mean you’ll be able to load games faster than ever before, making your overall experience even better. In addition, by adding a second SSD to their PISTONs, users will be able to load a second operating system onto their machines, including the newly announced SteamOS.”

Xi3 also revealed today that the company will ship PISTON Consoles with “pack-in” gaming titles pre-loaded onto its PISTONs. Details about publisher and developer partnerships, as well as a list of pack-in titles, will be released before Black Friday.

“Our goal is to set a new standard for the gaming world with the PISTON Console,” Sullivan said. “It’s so small and lightweight, it can easily fit in the palm of your hand. The PISTON has also been designed to be modular from the ground up, which means we’ve built it so it can be easily updated and upgraded—no other gaming console manufacturer has ever done that.

“Additionally, PISTON was built for super-fast gaming by utilizing SSD storage and prioritizing gameplay traffic. PISTON also gives you 3 Ways to Play—at your desk, in your living room, or via a Virtual Reality setup. And you can still play with a controller or via keyboard and mouse, you decide. And naturally, we’ll ship PISTONs pre-loaded with pack-in games. The bottom line is I can’t wait to get this into the hands of gamers everywhere ‘cause I know they’re gonna love it.”

Built on the modular and patented Xi3 Computer Architecture, the PISTON Console is housed in a grapefruit-sized, matte black aluminum chassis with chrome trim. The PISTON Console comes equipped with a quad-core x86-based 64-bit processor integrated with 384 programmable discrete class graphics cores capable of running the most popular games. PISTON further supports up to 4K-resolution (4096×2160 pixels) and provides users with the ability to run three high-definition monitors or displays simultaneously to provide a fully immersive gaming experience.

PISTON Consoles are available for pre-order today at $999.00 at http://xi3.org/buy_now-piston.php. Additional PISTON details will be released between now and Nov. 29.

Formed in 2010 and headquartered in Salt Lake City, Utah, Xi3 Corporation utilizes “The Power of X” to bring its building block approach to the world of computing and computer gaming, an approach Xi3 applies internally and externally to hardware solutions and software applications.

The shape of the three-sided single piece casing, the end plate, and the overall shape of the PISTON Console, as well as Xi3, PISTON, and “The Power of X” are trademarks and unique trade dress of Xi3 Corporation.