Going off grid is the solar power dream, right? Actually, I think that’s the wrong way to look at it. The grid is the ultimate battery backup for your solar installation. Local storage, aka batteries, are a great way to insulate your house from a grid outage or peak usage pricing, but I think for most people they probably aren’t worth the cost.

First, let me say insert a disclaimer about my unqualified opinions. I have lots of them, and this might fall into that category, so take it FWIW. With that out of the way, I should also point out that we did not opt for a battery as part of our solar project, but the reason probably isn’t that broadly applicable – we already have a natural gas generator installed, so a battery would be redundant for the function it would fulfill.

The town we live in was built on a swamp, so when it rains we get a lot of water, and it builds up quickly. It’s a massive problem for the town, the streets, and anyone with a basement. It’s enough of a problem for us, that whoever built our house ended up installing three sump pumps. Shortly after we moved in, one of those sump pumps failed, and with the water creeping up, even with the other two running, I made an emergency run to our local Home Depot for an upgrade. We also occasionally lose power during the summer, which is generally when the big wash-out-the-streets storms come, so it made a lot of sense to sort the problem quickly with a tried-and-true solution. Also, since I work from home, a power outage means I’m not working, Weighing the cost of a generator vs. what flooding would do to our finished basement plus missed billing from lost work, the ROI on the generator was a pretty easy sell.

If we didn’t have a generator, I would probably get batteries for the same reasons we have the generator, but outside of these relatively narrow set of use cases, I can only see a couple others where the ROI would be there: 1) if there’s a massive difference in peak/off peak energy cost & 2) the grid where you live is totally unreliable. 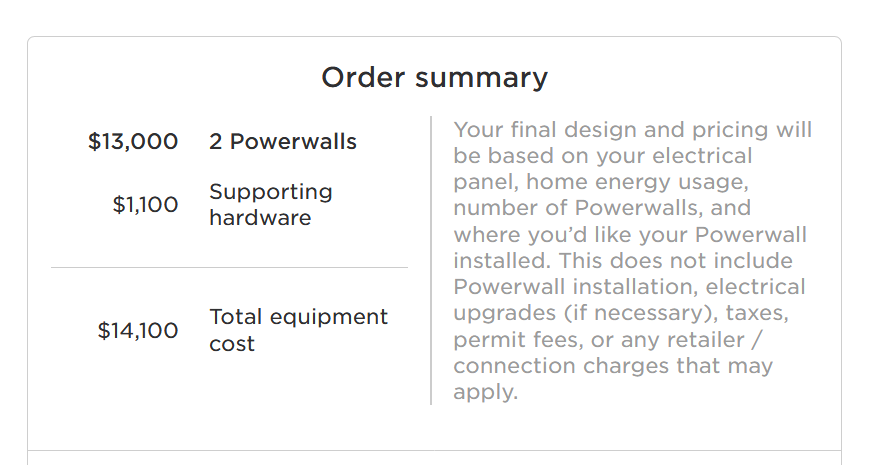 Taking the Tesla Powerwall system shown in the image above as an example; it would more than double the projected cost of our system. But, where the panels generate money, the batteries only potentially save it, and at least for me, only in a worst case scenario. Of course Tesla isn’t the only option here, so it might be possible to put in a slightly cheaper solution, but from what I found they aren’t that far off the norm. Some of the lack of ROI for me, is because we pay a flat rate energy charge in Illinois, but even if we didn’t, $14,100 buys a lot of electricity…