Nothing Says “We Listen To Our Customers” Like Ignoring Them: Fitbit Edition 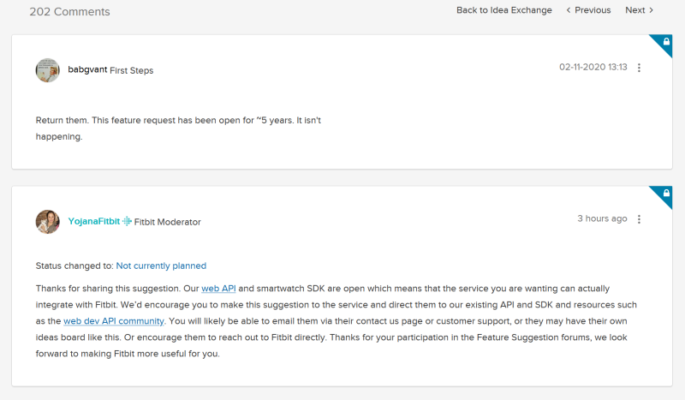 About five years ago, someone created a feature request on the Fitbit forums requesting that they allow the device to act like a BTLE heart rate (HR) monitor. Simple enough, Fitbit devices have BTLE (that’s how they sync with your phone), and they track heart rate (at least most of them). Adding this feature, which many other HR tracking watches can do, should have been pretty easy. Obviously not a massive priority, as five years have gone by, but you know, at least keep hope alive…

Yesterday they closed the topic, and responded in a way which demonstrated that they completely missed the point:

Status changed to: Not currently planned

Thanks for sharing this suggestion. Our web API and smartwatch SDK are open which means that the service you are wanting can actually integrate with Fitbit. We’d encourage you to make this suggestion to the service and direct them to our existing API and SDK and resources such as the web dev API community. You will likely be able to email them via their contact us page or customer support, or they may have their own ideas board like this. Or encourage them to reach out to Fitbit directly. Thanks for your participation in the Feature Suggestion forums, we look forward to making Fitbit more useful for you.

Which was to support an open standard for how one provides HR data to consumer devices, like a bike computer, my treadmill, etc. Oddly enough, had they just closed it with a “not planned” I wouldn’t have said anything. They never promised anything here, so no one has a legitimate grievance for the feature not being included, but missing the point so widely is worth commenting on because it shows how tone-deaf they really are.