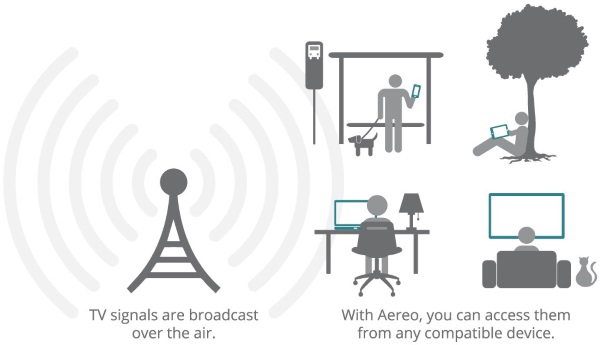 The recent SCOTUS ruling making the service Aereo provides illegal was disappointing, but not surprising given the stakes. I was discussing this with a friend who pointed out that “The micro-antennas didn’t fool anyone, it’s the same as cable tv”. Which makes an incredibly valid point because it draws focus to what is the real problem with Aereo — hubris.

For those unfamiliar with Aereo, it is essentially a service where you can view over-the-air (OTA) TV (live and time shifted) over the Internet on a wide variety of devices. They did this by connecting vast arrays of micro-antennas to individually sand-boxed DVR in a data-center; essentially taking something that we all agree is legal (the OTA DVR), scaled it horizontally in a single, consolidated, location and then sprinkled a healthy helping of Cloud Dust on top to make it useful. When I look at this, as a technical person, it’s not hard to see the trees for what they are – discrete DVRs, placed closely together and connected to the Internet. So the question has to be asked how adding scale to a legal product could make it illegal, and I think the answer is that the implementation doesn’t matter, the technology doesn’t matter, the how it actually works doesn’t matter. The only thing that matters is how it looks. Free OTA TV on one end, paying users on the other means Cable TV. Cable TV providers pay OTA networks when they do that, so Aereo should pay as well. We can safely ignore the other differences between Cable TV and Aereo because none of that affects how it looks.

Aereo built their business on the clearly flawed idea that the implementation would matter. So they set out to purposely design an incredibly inefficient mechanism to link a single antenna with a single user, ensuring that content is stored and provided discretely. If that had worked, it wouldn’t take much to envision a world where Cable TV providers could use similar workarounds to cut out rebroadcasting fees to the OTA networks if the numbers worked. Challenging an entrenched business model important to a powerful group is risky, Aereo paid the price. That’s hubris.