As desirable as placing an audio video receiver (AVR) or amplifier and full set of speakers at each point of media consumption would be, it is impractical from a cost and aesthetic perspective.  With the convenience of wired and wireless audio support alongside medium density fiberboard (MDF) construction, the MANHATTAN 2800 Acoustic Series Bluetooth Bookshelf Speaker System promises to deliver value and flexibility in the crowded segment of PC-style amplified stereo speakers.

The MANHATTAN 2800 Acoustic Series’ glossy piano black face and exposed white drivers make them much more visually appealing than most PC style speakers.  Using MDF cabinet construction, material choice also differentiates the unit from other, mostly plastic, speakers.  This pays dividends in sound quality giving the 2800s a significant edge against similarly sized/priced amplified stereo speakers.  That said, while the 2800 delivers well in the high and mid ranges, the smaller form factor demands some trade-offs at the low-end where the system still sounds good but would benefit from a dedicated subwoofer–something that would add cost and reduce portability.

Besides a traditional 3.5mm stereo input, this model offers Bluetooth (BT) connectivity (there is also a non-BT 2800 Acoustic Series speaker set).  Having played a little with early implementations of A2DP audio my expectations for the feature were very low, but after setting it up and listening to music I must admit the experience was excellent.  Pairing was easy and audio quality is good with no discernible difference at reasonable listening levels between BT and wired when using the same device (in this case a Samsung Focus).  Range was also good as long as the source was located in the same room as the speakers, but quickly deteriorated when introducing walls into the mix.  The signal was reliably able to pass through windows though, so it was possible to place the source inside and the speakers outside as long as the distance between them was relatively close (~20’).   However there are a couple nit-picks with the experience that could be changed to make it better.  The first is that the blue LED on the front of the left speaker blinks whenever BT is on; which in some locations is acceptable, but in many of the places where the speakers were tested it was a visual distraction from the media or just annoying (e.g. listening to music while going to sleep).  The second is that after power cycling the system it does not persist the previous state, so BT audio must also be turned on – something that proved too complex for the younger members of the testing group. 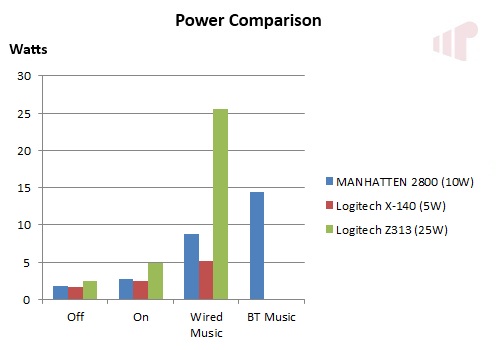 Never having taken the time to measure power use for amplified speakers before, it was disappointing to find that each pair in the sample consumes electricity even when turned off as none offer any functionality when powered down.  With the other two speaker sets lacking Bluetooth capability, there is not much to say except that at full volume the MANHATTAN 2800s (and each set of speaker) performs consistently with its rated power level and falls between the 2.0 X-140 and 2.1 Z313 in the two other comparable states.

The MANHATTAN 2800 Acoustic Series Bluetooth Bookshelf Speaker System handsome looks and MDF cabinet construction (which translates into better sound quality) make them stand out against comparable PC style amplified stereo speakers.  Despite its solid performance, the unit’s “Bluetooth” feature is the most obvious differentiator from similar systems and in most cases will be the deciding “must-have” feature between it and another model as it not only makes its way into the product name but the MSRP of $99 (street ~$75).

Thanks to MANHATTAN for the review sample.