Life With a Plugin, Episode 9: MCEfm 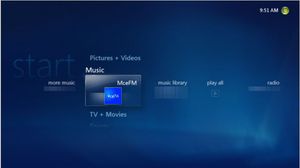 Many people use Media Center to combine their music collections into one. But more & more people are learning the joy of websites like Slacker, Pandora, and the one for this plugin, Last.fm. These sites basically bring all sorts of music to you, based on particular artists that you like to listen to. Best of all, these services are free & legal–the songs are streamed across the internet, not downloaded to your system.

MCEfm has not been around many months, but it’s one that many people
have been asking for a long time. Essentially, it brings you the same
functionality provided by the Last.fm service, but through the
convenience of your 10′ Media Center & remote control. The app is
only in a Beta 5 of its first release, but I felt it was worthy enough
already due to the convenience & the lack of other options.

The program is quite simple, and consists of 3 sections: The main
page, the search page, and your queue. The queue only shows 5 songs at
a time, and you need to skip the songs to see the next ones.

There’s not much extras provided, but I’m not sure what "power"
users of Last.fm would want. At it’s core is the search functionality,
which allows you to search by Artist or Tag, and I found it to be as
effective as the website itself.

MCEfm is clearly still in beta, so be forewarned. It did crash on me a
few times, and is not the quickest application in the world. Also, from
a design/UI perspective, it wastes a TON of space. I would have loved a
bit more creativity on the Queue layout page rather than the tons of
blue space and lack of controls. I didn’t like having to skip the 5
songs just to be able to see the next 5 on the queue. Again, take the
feedback with a grain of salt, as I’m sure the program will continue to
evolve as it gets closer to its V1.0 release.

Surprised that a Beta application can achieve my highest rating?
I’ll be honest, if there was much competition for MCEfm, then it
probably would not have received it. But the honest truth is that
there’s not much else out there, and this beats having to use my
keyboard & mouse in my living room. As my Music tastes have gotten
bigger, my collection has actually reduced due to space constraints
(damn you 4 tuners!!).

That being said, having a gf & a roomate with completely
different music tastes is no longer a problem with MCEfm as each person
can simply play the type of music tracks they like, and listen
endlessly. Sure you don’t get to find a specific song you want, but
hopefully MCEfm’s success in the MCML world will open the door for more
integration with other online music providers.