Contest Winner! afinch is the winner!

Congratulations afinch! You are the winner of our HTPC giveaway contest! You were lucky reply #23 that was chosen by the random number generator! An email, private message and of course this message is your notification of winning! Please respond back to claim your prize! Below is what the lucky duck won!   Chassis: Zalman HD160 HTPC Case OS: Windows […]

END_OF_DOCUMENT_TOKEN_TO_BE_REPLACED

While Blu-ray playabck has been around for awhile, the audio portion of the equation has been slow to catch up. Solutions are slowly trickling out in the form of the GeForce 8200 chipset but the stand alone card market has been rather slow to respond. The good news is that ASUS is ready to make amends with their release of […]

END_OF_DOCUMENT_TOKEN_TO_BE_REPLACED

One of my favorite sites, High Def Digest, has the scoop on a bunch of favorite movies. First up the two juicy rumors: MGM Readying Bond Titles For Blu-ray Release? HighDefDigest The French website filmsactu.com is reporting today that MGM (via its parent distributor Fox) will release a half-dozen Bond titles on Blu-ray in France on November 5, 2008. Universal Plotting […]

END_OF_DOCUMENT_TOKEN_TO_BE_REPLACED

The End and the Beginning

It was a fine spring day.  The sun was shining all day.  The family got to spend a lot of time together.  The little one is now asleep and it’s time to unwind.  I grab myself a Dr. Pepper, and my wife and I sit down for a nice relaxing evening of tv shows.  I reach for the remote and […]

END_OF_DOCUMENT_TOKEN_TO_BE_REPLACED

There are no reviews out for the Hauppauge HD-PVR yet but here are some peoples experiences with the device so far: GBPVR I’m going to try to figure it out this weekend.

END_OF_DOCUMENT_TOKEN_TO_BE_REPLACED 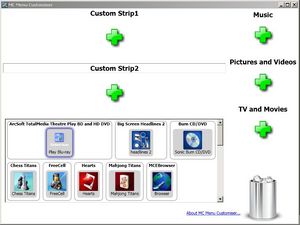 One of the biggest complaints I’ve heard throughout the years about Windows Media Center is that everything is locked down. Changing the background or appearance usually takes some sort of odd registry edit, and who wants to do that? Well, fortunately, there’s some great developers out there who feel your pain & design apps to help you out.  Overview MC […]