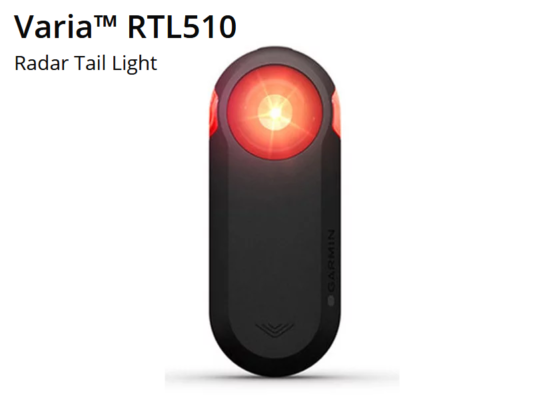 The Garmin Varia RTL510 Bicycle Radar & Light is a bit of bicycling magic. Yes, at $200 SRP (~$170 street), it is expensive, but the value it provides both as a smart light, and most importantly, a rear facing radar device far outweighs the cost and not awesome battery performance.

Yep, only one mount is provided.

I have no complaints with the packaging. But it is criminal that for a $200 device, Garmin only provides one, flimsy mount.

Yep, that's a bit of shrink wrap to make it shorter.

You'll see a lot of this

OK, perhaps flimsy isn’t the right word for it. Half of it is bulky, and doesn’t even fit right on a flat back seat post (3M Command Strip to the rescue). So when riding it turns to the side and, pretty much stops working. The other half of the mount is essentially a rubber band. Which doesn’t really inspire long term confidence, so I added a camera lens tether (+ some heatshrink) for insurance.

30g for a bit of plastic and a rubber band

Couple things that really disappoint about the Varia RTL510. The battery life, and the weight. I knew about the weight, so that complaint has less validity than the battery life. Garmin claims ~15 hours, I get ~4 before it complains that the battery is low. My guess is that I could get another hour, maybe an hour and a half after that based on the percentage, but even so. That is not even close to 15.