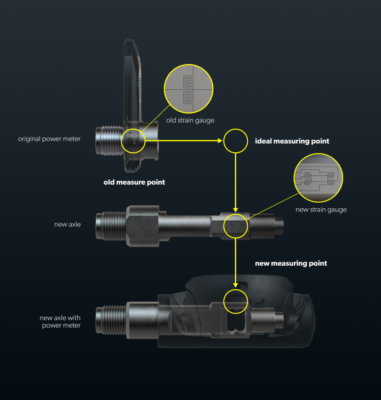 Measuring power between the pedal and the crank was a massive feature of the iQsquare power meter. Combining this with the flexibility to swap in whatever pedal you like, it offered a unique value proposition, irrespective of its incredibly low [relative] price. Unfortunately, it appears that physics has intervened, complicating things to the point where they have decided to make a pedal instead. One, Look Keo compatible, for road, and the world’s first (SPD compatible?) MTB power meter in a pedal. It is unclear whether it will be possible to swap pedal types on the spindle once assembled.

On the one hand, it’s fantastic that they have kept with it, have been so open about the process (can’t stress this enough), and will be providing the power meter solution at no extra cost to backers. We’re all too familiar with stories of crowd funded shortcomings. But, on the other, the product has so fundamentally changed that the flexible user story which initially sold the meter is no longer valid. And as a backer, I’m quite conflicted about it.

When we received our first batch of mass-produced power meters in February, we were proud and excited to do a couple of final tests before upscaling and shipping. The measuring electronics were produced, sensors were stable, power management was successful, software was finetuned, the configuration apps were approved, ANT+ and Bluetooth worked, temperature influence was tackled, and the casing was dust and waterproof. Also, we had produced consistent data throughout.

But… when several cyclists tested the power meter on the same bike, minor random offset changes appeared. It was an unprepared-for situation that kept us occupied for a long time and caused a number of sleepless nights, much to your and our frustration. Our data analysis team and UK manufacturer SMD Sensors were equally surprised.